"The mountains are calling and I must go" - John Muir

What an incredible month it's been, I finally did my first 100mile ultra (114miles in the end!) , the Ronda Dels Cims in Andorra and then was given the opportunity by Skyrunning (Thank you Lauri and Marino!) to run the next race in the Skyrunning World Ultra Series, the Ice-Trail Tarentaise in Val D'isere, just 3 weeks'later...More on that one in a few days though!

So the Ronda Dels Cims (RDC), what a monster of a race! I first heard of this through Stevie Hastons' blog where he wrote an article on "10 of the Best Long Runs", where the RDC featued and was described as "possibly the hardest 100miler out there, go and try it and tell me"...Well Stevie if you ever read this, I can confirm that it certainly was tough, rough and the hardest run I have ever done. As to whether it's the hardest 100miler out there, I can't really comment as it was my first, however I can't envision a course more challenging over that distance!

So the race....I met up with Terry Conway at his hotel at 06:15am and we walked down to Ordino town in preperation for a 07:00am departure. I felt apprehensive about tackling this race, especially having not reccied any of the course, I found it hard to imagine just where this course would take us, and just how a route this distance takes 30hours+ to complete!
So at 07:00am, 300+ runners set off from Ordino on a journey that would take them over/around the mountainous country of Andorra. I ran with Terry for the majority of the first 50miles, which proved to be the most enjoyable part of the race. It was great to share the experience with a fellow Brit and get tips off someone so experienced at this distance. Terry really helped keep me at a conservative pace over this first part and it was just a really enjoyable way to spend the first day of the race and communicate the beauty and difficulty of the course.

Sadly just before the night section, just over 50miles in, Terry had to pull out. It was a real shame after having shared such a great first day.
What followed through the night was a tough mental game which involved me trying to keep moving enough not to fall asleep. The beauty of the mountains were magnified through a clear night combined with the snow capped peaks around. I found myself stopping every few hours, turning my head torch off and just admiring the moon lit peaks around me...it was incredible.
I was extremely sleep deprived however, and found myself craving sleep at every aid station. I was conscious of my position (15th at the time) and knew if I wanted to maintain this, I had to keep moving.
"It will come". Three simple words that I kept repeating to myself through this darkest of times (literally). The sun would rise, the sleepiness would be forgotten and I knew the discomfort I was experiencing would soon end.
As the sun rose, the sleepiness did disappear as I tricked myself into thinking this was the beginning of a new run and I had been treated to a full nights sleep the night before!
The rest of the day was a blur of checkpoints, sunshine, burnt skin (no sun cream!) and sore, wet feet.
I just kept moving, knowing that at some point the end would come.
The final ascent was a monster and the only thing that kept me moving was the fact I was now in 13th and wasn't going to let a little foot pain and fatigue slow me down at this point.

I gritted my teeth and pushed the final descent, grimacing every time my feet landed on a rock/tree root (so quiet a lot being a mountain trail!)
I was really surprised and happy to be met by Terry halfway down this final descent and he helped me hammer that final section to the road where we ran through to the final stretch where Rick (my bro) and Annie (Terrys' wife) were there cheering me on the last 100 metres.
I wave of emotion hit me as I crossed the line and I collapsed on the ground in tears. It had been an incredible experience, 114 miles, 12,200m of ascent/descent in over 35hours of constant movement without sleep. I managed to finish 13th overall in my first 100 miler, I know I can do better though! The Ronda Dels Cims is a true mountain run....boulder fields, snow fields, river crossing, steep ascents/descent, and big sections with no paths at all! If you want a tough 100 mile mountain run, this is THE one to go and do, you will not be disappointed. The support and organisation were brilliant and it will be an event I will travel back to in the future, I met some amazing people out there and hope to see them in the future.

The following days were mega chilled out, spent hanging out with Rick, Terry and Annie before heading to Barcelona for a few days of wondering around and sleeping in the sun. 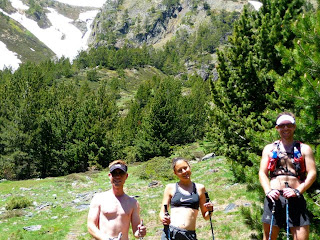 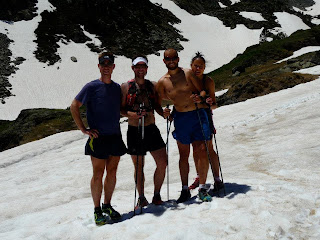